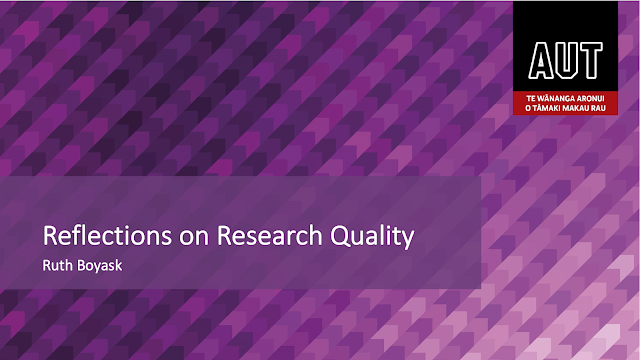 ‘Quality’ has been a tertiary education policy buzzword under both National and Labour governments over the last decade in New Zealand (see, for example, Ministry of Education 2006, 2009), but appeals to this much overused and often ill-defined notion mask deeper changes at work in the reconfiguration of research and researchers. These have been felt especially keenly in Education, where, one-by-one, all of the former stand-alone teachers’ colleges in New Zealand have been amalgamated with universities. The first such amalgamation occurred in the early 1990s and the last in the second half of the first decade of the 21st century. This has been, in part, a shift from a strong practitioner culture to an environment where research is expected to be an integral part of the job.
Roberts, P. (2013). Reconfiguring research in New Zealand: education, politics and performativity. The Australian Educational Researcher, 40(4), 509-512. doi:10.1007/s13384-013-0108-x
at October 06, 2020 No comments:
Email ThisBlogThis!Share to TwitterShare to FacebookShare to Pinterest
Labels: Rangahau
Newer Posts Older Posts Home
Subscribe to: Posts (Atom)